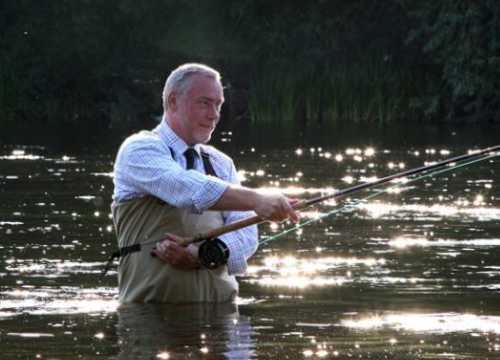 The hotel sits right on the banks of the Tweed (bang in the middle of both Dryburgh beats), widely recognised as the best and most consistent salmon river in Europe.

The hotel is well placed for all of the prime beats with Kelso a mere 15 minutes downstream, and Coldstream approximately 25. The Hotel is run by people who enjoy the sport themselves, so they know exactly what you need to complement your day on the river. The hotel has excellent rod and drying rooms and meal times are flexible to suit the season and your own preferences. You may wish an earlier dinner so you can return to the river for that final cast. Most beats are so close that you can return to the Hotel for lunch, but most parties settle for a packed lunch, tailored to their own requirements.

Many guests have arranged their own fishing, and have been returning to the Hotel for the same week year after year, but the hotel has excellent relationships with local estates and landowners and can often arrange fishing on your behalf. In addition, the hotel has a few weeks on a couple of the rivers best beats at prime time and, while 'first refusal' is given to those who have taken the fishing before, vacancies occasionally occur.

As far as other types of fishing is concerned, hotel guests can fish for trout or grayling on the part of the Tweed which is within the hotel grounds (at no cost), and trout fishing is widely available on other rivers and lochs within easy reach of the hotel. There are two first class tackle shops within 15 minutes of the hotel; Tweedside Tackle in Kelso and Borders Gun Room in St Boswells, both of which stock excellent tackle ranges and can provide advice and information on other types of fishing available in the area.

The hotel has received many industry accolades, including winning the Country Sports Hotel of the Year for an unprecedented six years in a row (Scottish Hotel Awards).